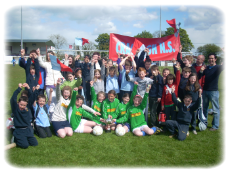 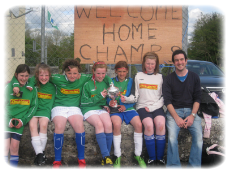 2010 saw Craggagh NS embark on a journey through unchartered waters, negotiating numerous challenges and obstacles along the way.

Capturing both County and Connacht titles and finishing second in the All Ireland was a stunning achievement for a small school such as ours, especially when we had only 6 girls from 3rd class up. In fact, a squad of just 5 travelled to the All-Ireland Finals in Tullamore with Katie Mc, at just 9 years of age leading the line up front!

Jessica, Lisa, Rachel, Katie D, Aoife and Katie Mc began this exciting journey by capturing the school’s first ever county title in dramatic fashion in Milebush Park, Castlebar. After negotiating the group stages and all the knock-out rounds, extra time was eventually required in the final encounter with our neighbours in Belcarra, with Craggagh eventually winning out on a 1 – 0 scoreline.

That victory catapulted the Craggagh Girls into new territory; the Connacht Finals. Each county in the province was represented:

These finals were run a round-robin basis, so the top ranked team would be crowned Connacht Champions!
There were no easy games, and teams were very evenly matched, but with a brilliant combination of determination and skill, Craggagh prevailed by winning all four games, thus finishing top of the table.

May 28 th, 2010 was a historic occasion for the Craggagh community. It was a case of "last one to leave, turn off the lights!" as convoy of cars and busses departed for Tullamore and our first ever All-Ireland Final.

Our squad of just 5 girls took to the field in our opening game, which  pitted us against eventual champions Moville, from Inishowen, Co Donegal. Early nerves got the better of Craggagh and we shipped a heavy defeat against a much stronger team. This result virtually put the All-Ireland title beyond our reach straight away.

Nevertheless, the girls picked themselves up and resolved to target the Runners-Up spot. Two very determined and gutsy performances in the following games saw Craggagh achieve this goal.

In an extremely tight encounter, Craggagh narrowly defeated the Munster Champions, from Newmarket on Fergus, 3-2. Finally, a 4-2 victory over Leinster Champions , Geashill, Co Offaly ensured Craggagh’s 2 nd place position. The miraculous turn-around by the 5 girls from Craggagh was the talk of the tournament and won admiration from all quarters.

Exhausted but proud justifiably proud, the team, their supporters, parents and teachers returned home to bonfires and celebrations!

Below, you’ll see slideshows from The All-Ireland in Tullamore, The Connacht Finals at Shiven FC, Galway, the Connacht Homecoming and the County Finals in Milebush, Castlebar.