A History of Craggagh NS
Established 1884 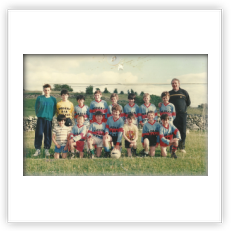 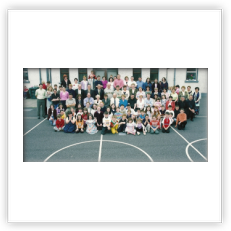 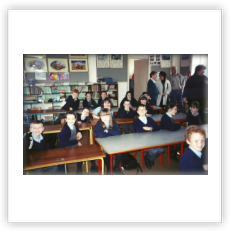 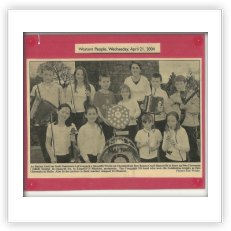 Craggagh School House is a two-storey structure situated along the main road between Balla and Kiltimagh. It’s the only “country” school surviving in the parish of Killedan. The steep slopes of Sliabh Cairn, the colour of whose vegetation changes with the seasons, and which has a distinctive line of trees labouring to its crest, forms the perfect backdrop for this picturesque setting.

The site for this school, originally twenty perches in area, was acquired on the Sir Compton Domville Estate. Very Rev. Matthias Leonard, Parish Priest of Kiltimagh, built the school in 1884. The total cost of the new school was £841-11-8 of which about one third was contributed locally. Originally, there were two schools contained in the building. Upstairs was the Girls' National School, while the Boys' National school was on the ground floor.

The two schools were amalgamated on the 1st January 1938. In 1941 the school underwent extensive renovations. These included the building of concrete stairs, new toilets, chimneystacks and new entrance doors. Plastering was carried out both internally and externally. Much to the delight of the pupils, the school was closed from April to November in that year. The next phase of renovations and improvements took place from 1969-1970. Local contractor, Mr. Eamon Higgins, supervised the building of play shelters, a central heat system, and the covering of the schoolyard with tarmacadam. At this time, also, a new playground, adjacent to the school, was acquired. From the early years, a wide range of subjects was taught at the school, and a great number of students availed of them. In 1889, 103 boys and 115 girls were enrolled.

Absenteeism was high in those years, frequently 50%. This was due to the economic conditions at the time, and the fact that education wasn’t compulsory until the 1920’s. The girls were more regular attendees than the boys. Records show that evening classes were held in 1912, and that summer holidays commenced in mid August and continued to the second week in September. The first girl registered at the school on the 3rd March was Annie Cassidy of Derryvohey while the first boy was Bernard O’ Donnell of Craggagh. From 1884-1922, the most common surnames were: Walshes, Kellys, Carneys, Maloneys and Begleys. June of 1984 was a special time of celebration as the school marked the centenary of its foundation. The children performed a special centenary pageant, which was followed by a birthday party and disco. Most Rev Thomas Flynn, Bishop of Achonry, presided at an open air Concelebrated Mass. Afterwards, the Bishop unveiled a special plaque. The celebrations concluded with dinner and social in the Westway Hotel.

Since the centenary year, further improvements have taken place at the school. In 1986, the school was connected to the group water scheme at a cost of £2,500. One year later the school was rewired, fitted with new lighting, and a new oil fired central heating system was installed. An extension to the school in 1992, made provision for new toilets, a staff room, and a remedial room. Within the next few years, new windows were put in place, and the planting of flowers and trees enhanced the appearance of the school building and grounds. In 1997, the school was rewarded for its enhancement efforts when it received a spe prize in the Schools’ Environmental Awareness Awards sponsored by the ESB, and organised by St. Patrick’s Training College, in Dublin. The school was presented with its award at a special ceremony in Dublin. The school was also awarded 3rd prize in the Tidy Schools’ category, which covered the county of Mayo.

Recent developments mean that the school has not been left behind in the IT age. The family of the late Mary Egan, formerly Mary Kelly of Carrandine, who attended the school in the early years, donated a multi media computer to the school. On the 2nd of July of last year, a new computer room was opened in the school. The Maloney family of Ballyclogher who presented the school with eight new computer and printers made this new facility possible. Mr. Mike Maloney, marketing director of Gateway Computers whose late grandfather Patrick Maloney was once a pupil of the school, officially opened the new computer room. Craggagh National School is a good example of a school which has not just survived over 100 years, but has flourished and adapted to the changing fortunes of time. It has been, and will surely remain a focal point for learning in this small community, in the years ahead. All who have passed through its doors hold it in high esteem and with great affection, and this has been exemplified by the recent generosity of its past pupils. But, perhaps, more than anything else, the photograph of the pupils and teachers of 1999-2000 portrays what is characteristic of this school; its neat rows of well disciplined children, yet smiling, and with a sense of well being and pride, looking confidently into the camera lens, and into the future. Well done to the founding fathers of the school; to the present and past teachers; to the present and past pupils; to the boards of management, and not least to the parents and benefactors. 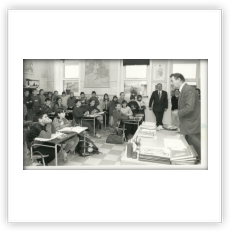 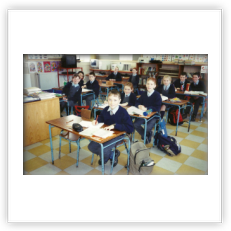 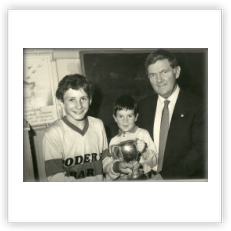 This article was originally published by Aiden Burke on Kiltimagh.net (http://kiltimagh.net/features/PDFs/craggagh_school.pdf). Also acknowledged in the original item were former Principal Thomas Macken who provided the information and the late Gerry Walsh who provided the picture of Seán T Ruane. Some minor edits and additions have been made to the original article with the author's kind permission.